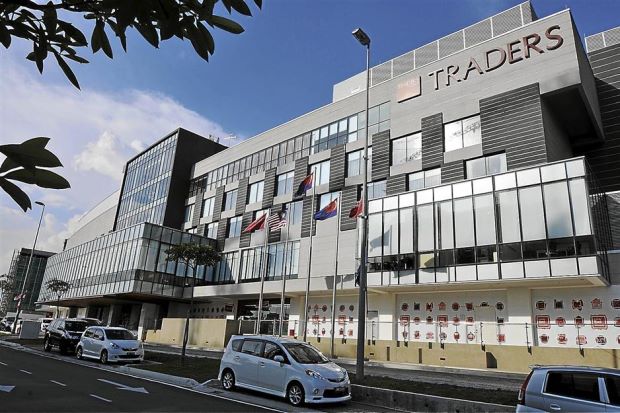 Classy hotel: Traders Hotel Puteri Harbour in Nusajaya, Johor is a RM235mil-hotel with four storeys and was opened on June 1 this year with the remaining fourth tower yet to be unveiled.

UPON entering the newly opened Traders Hotel @ Puteri Harbour in Nusajaya, Johor, guests have “literally sailed” into the nautical and maritime world.

The hotel’s internal interior evolves on all things related to ocean such as waves, corals, seashells, bubbles and cool shades of blue and sandy brown hues.

The interesting visuals and textures of the marine-related interior have created some sort of tranquillity and soothing atmosphere of the place.

The beige grooves on the ceiling at the hotel’s lobby have those coral reefs-like effects against the backdrop of a wall of abstract watery waves of various shades of blue.

“The bold ceiling features serve to reinforce the running theme of being on a boat on water,” general manager Sigi Bierbaumer said in an interview with StarMetro.

The waves-like elements incorporated in the furniture, walls, floors as well as artworks further reinforced the hotel’s marine-themed décor.

The remains of an old tree trunk which previously grew on the vicinity before the land was cleared for development was kept at the lobby lounge.

The RM235mil four-storey property was opened on June 1 this year and located within the award-winning Puteri Harbour Waterfront Development.

Its neighbour is the Puteri Harbour Indoor Family Theme Park – home to characters such as Thomas and Friends, Bob the Builder, Barney, Angelina Ballerina and Sanrio Hello Kitty Town.

“A huge nautical map of past fishing routes etched on a mirror partition and floor covered by indigenous woven mats – creating a feeling of being in a kampung house in the traditional fishing village,’’ he said.

Over at the dining area, mementos from the past like tingkat (tiffin carriers), metal flasks, kopitiam cups and lacquered metal trays adorned the racks.

Bierbaumer said colours adorning the cafe were inspired from different spices to create a warm ambience for diners triggering the sense of taste, smell and sight. 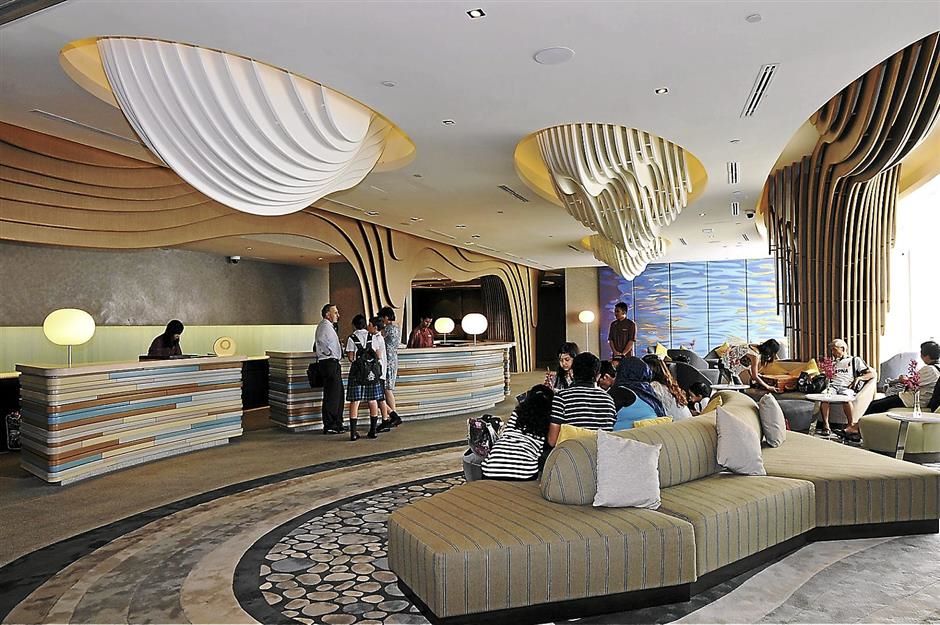 Chic decor: There is much to see at the lobby area of Traders Hotel Puteri Harbour in Nusajaya, Johor as it is decorated with strong coastal concept to resemble waves, corals, seashell, bubbles with grooves and textures of cool shades of blue and sandy brown hues.

Contemporary batik motifs are featured in the ballroom and function rooms on the fourth floor on the wall panels and the carpets.

“Batik motifs are synonymous in this part of the world but we decided to give modern twists to the traditional art form,’’ he said.

Bierbaumer added that many of the hotel’s guests gave their thumbs-up to the batik motifs which they found attractive and blended well with the overall atmosphere of the place.

The centre of attraction at the landing area of the function rooms are the 100-year old merbau tree trunk functioning as a bench.

“Looking up, guests will find baubles of adjustable white lights hanging on the high ceiling representing bubbles in the river,’’ he said.

Another feature to lookout for at the hotel is the Sky Bar pool deck where guests can enjoy a rooftop infinity pool. 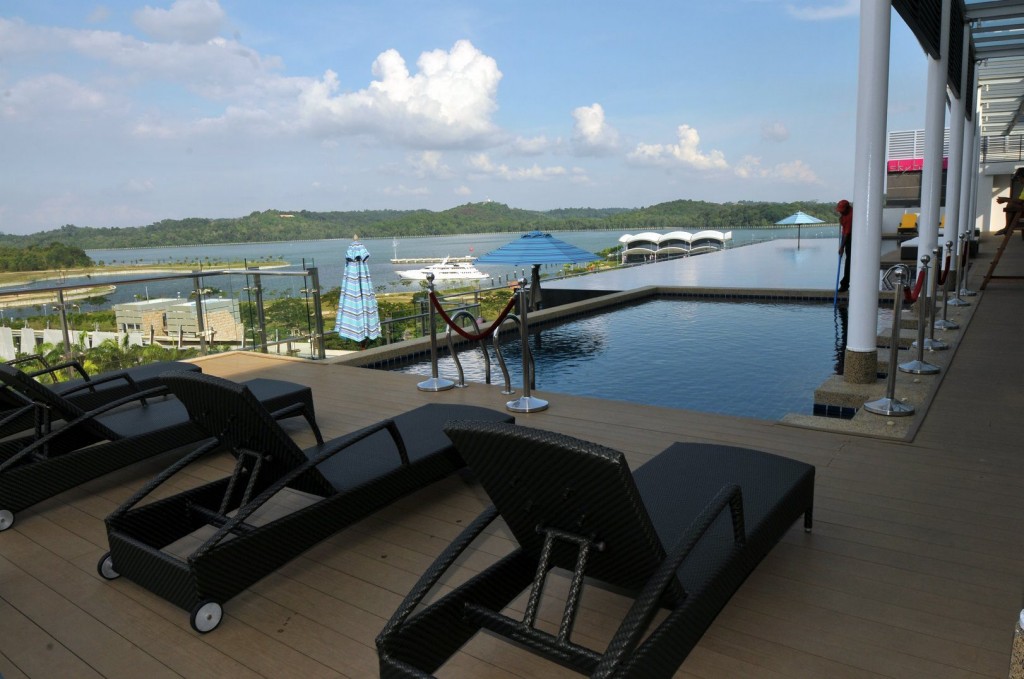 Amazing view: Guests can kick back and enjoy the waterfront view from the deck chairs at traders Hotel Puteri Harbour’s rooftop infinity pool next to their Sky Bar.

In keeping with the hotel’s nautical-themed decor, the bar counter was designed resembling a boat’s helm (steering wheel) that functions as a pulley to incline or decline the large window panels.

Inside the guestrooms, guests would see steel fishes hanging above the bed headboard as if they were swimming towards one of the bedside lamps.

“Sandy tones and watery blue-grey shades used in the rooms reflect the maritime concept to help guests get a good night sleep and feel at ease,’’ said Bierbaumer.

Other highlights include the customised designed fish mobile circling the light imitating a swimming school of fish while the geometric patterns on the walls of the Club Lounge designed after the fishing net. 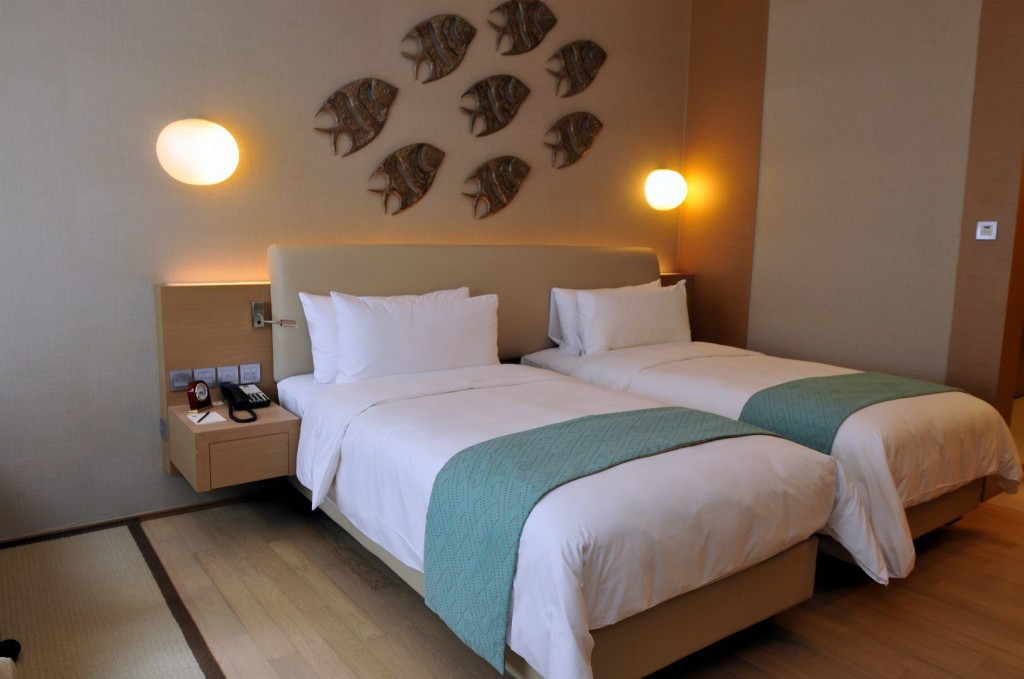 Comfy bed: A deluxe room at Traders Hotel Puteri Harbour in Nusajaya, Johor where steel fishes hang above the bed headboard as if swimming towards one of the